Black marketers have shaped our industry for decades. Let’s celebrate their work today—and look toward tomorrow. 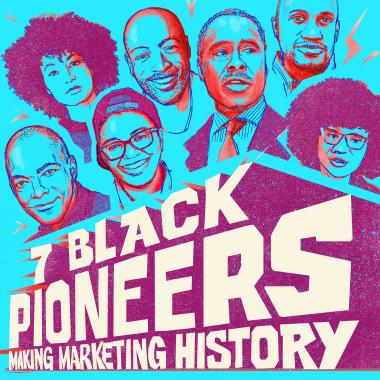 If marketing reflects and shapes culture, Black Americans have been world-class marketers even when they’re not in the room. (Looking for a cool catchphrase, copywriters? Just appropriate Black culture! It’s lit!)

But the fact is, Black marketers still aren’t in the room enough; our industry is roughly 85 percent white and 7 percent Black, according to the Bureau of Labor Statistics. But as the seven Black pioneers here reveal, their impact on communications is larger than numbers alone indicate. As you read about them, ask yourself: If these master communicators have accomplished so much despite living in a racist society, what will our industry be capable of once we’ve demolished that barrier?

“Black people are not dark-skinned white people.” It seems obvious today, but advertising titan Tom Burrell’s maxim was revolutionary when he began working with this framework in the 1960s. And no case study demonstrates this more clearly than his best-known work: the Black Marlboro man.

After experimenting unsuccessfully with images of Black cowboys, Marlboro turned to Burrell. “The last thing I want to do is go back a hundred years with a bunch of rural, cowboy white guys—doesn’t sound too safe,” Burrell told NPR in 2015. He looked past the costuming of the Marlboro man and into his essence: independent, assured and utterly cool. That persona came to life in a Marlboro man who wasn’t just Black but also urban, surrounded by people instead of longhorns, his poise illuminated by his community instead of by his lack of one.

Burrell went on to develop campaigns for our nation’s most iconic brands, including McDonald’s and Coca-Cola. Burrell retired in 2004, but Burrell Communications lives on, creating award-winning campaigns that do everything from bathe viewers in Maya Angelou’s tones of liberation to #RedefineBlack.

Essence wasn’t the first magazine for Black women (that honor goes to Ringwood’s Afro-American Journal of Fashion, which debuted in 1891). But it was the first to catch air nationally. And without Edward Lewis, it might have suffered the same fate as its predecessors.

Lewis co-founded Essence Communications in 1968 with the goal of providing content for an underserved audience. Jet and Ebony had been around for years, but Black women didn’t have a storied publication that spoke uniquely to them. Taking flight amid the conjunction of the civil rights movement and the women’s liberation era, Essence debuted in 1970. The powder keg of forces surrounding the magazine’s creation was powerful enough for HBO to take notice—look for an upcoming HBO Max series about Essence’s founding.

Like other pioneers, Lewis didn’t rest after his signature achievement. He went on to co-found Latina magazine in 1995, today the leading publication for Latinas.

Strategists see the big picture. For Blake Desormeaux, that extends into all parts of their work, their identity and their career.

“I appreciate that my cohorts all around the world are trying to put more Black visibility into their spots,” they say. “But it means absolutely nothing to me if most Black people still can’t afford your products, if Black people at your factories aren’t represented in your leadership. And a lot of people in the industry don’t realize that I’m not an outlier.”

Desormeaux was first able to flex this big-picture approach while working on the Love Beauty and Planet account at Virtue Worldwide. They saw an opportunity for Unilever’s proprietary in-house brand to step away from the standard social media playbook and recommended that Love Beauty and Planet redirect resources intended for Twitter toward social awareness efforts.

Their current oncological work at Digitas Health distills their approach to strategy to its core: finding the audience where they’re at. Instead of segmenting audiences by demographic or interests, Desormeaux segments audiences by their position in the patient journey and by challenges patients faced pre-diagnosis. “What do we do for a patient who lives in a food desert to let them know that this drug is possible for them? How do we get a patient who avoids the medical system because of rampant transphobia to trust themselves enough to go to a gynecologist and ask for a treatment for their reproductive cancer?” they say. “It’s what I had been doing strategically, but elevated.”

Behind every good woman lies another good woman. So when it comes to a woman as powerful as Oprah Winfrey, that behind-the-scenes mastermind needs to be equally powerful.

Enter Robin Beaman. The marketing and PR phenomenon had already led communications for Black Entertainment Television (BET) through its adolescence, creating its first public relations department. By the time she was overseeing all consumer marketing for the network, she was ready for a change.

As the PR and publicity manager for The Oprah Winfrey Show, Beaman helped shape the foundation of one of the most groundbreaking shows on television. Not that she stopped there: Today, she’s president of the communications company she founded, Beaman Incorporated, continuing her tradition of digging deeper to find the spark that can ignite a brand.

“You need diversity of thought because sometimes people may think too much alike,” she told Rolling Out in 2020. “Black women are trendsetters and are brilliant.”

“You can’t be what you can’t see.” Hans Dorsinville has turned to this quote from Marian Wright Edelman to help the public see more: more people of color in industry leadership, more pathways to success for Black creatives, more inclusive brand messaging.

The sentiment famously came to light with his Lane Bryant campaigns, #ImNoAngel and #ThisBodyIsMadetoShine. By subverting the Victoria’s Secret Angels to reveal the limits of what the advertising and fashion industries have traditionally defined as “sexy,” he showed the 68 percent of American women who wear clothing size 14 and larger that plus-size and beauty go hand in hand.

Currently the chief creative officer for Beauty@Gotham, Dorsinville has made appearances on AdWeek’s Creative 100 and “18 Top Creative Leaders Whose Ads Are Breaking Through Into Culture,” and he has freely discussed how his experiences as an openly gay Black man have shaped his perspective within our industry.

Saturday Morning will have succeeded when it no longer needs to exist.

That’s the guiding dictum from the agency founded in 2016 by Keith Cartwright, Geoff Edwards, Jayanta Jenkins and Kwame Taylor-Hayford. The mission: to directly address racial injustice through powerful messaging. The results: “The Look” for Procter & Gamble. The Black History Is Now campaign for Spotify. Peace Briefs, underwear featuring visible waistbands emblazoned with shockingly simple messages such as “I’m a father” and “Please don’t shoot.”

Black-led agencies have existed for decades (thank you, Vincent Cullers), and earlier in our nation’s history, their mere existence was an anti-racist statement in and of itself. But by starting out with an explicitly anti-racist ethos, Saturday Morning sets out to take Black creativity and strategy to the next level. The hope is that soon, it will no longer need to exist. A parallel hope is that when that day comes, Saturday Morning will be there setting the stage for even more showcasing of Black excellence.

Oppressed people have always had to excel at marketing to be heard. If marketing is the act of communicating offerings that have value to the intended audience, even civil rights strides such as the Birmingham bus boycotts could loosely fall under that definition. And by dint of being shut out of traditional venues, oppressed people have needed to mine their own creativity to deliver their message.

Not all of that marketing is professionalized. That doesn’t diminish its value. If you’re reading this, chances are you’re paid for your marketing work—but paid labor doesn’t define the bounds of marketing. So our seventh pioneer is all of the Black marketers who may not think of themselves as “marketers,” but whose work contributes to their communities and the world at large. (If you doubt the creative savvy of non-professionalized marketers, take a look at how their work is exploited. Exhibit A: Pepsi’s misstep in capitalizing on the Black Lives Matter movement.)

Here’s to marketers like Ianne Fields Stewart, founder of The Okra Project, a collective that brings home-cooked, culturally specific meals and resources to Black trans people—and that has leveraged its platform to share resources and bring people together for peaceful rallies. Here’s to the hive mind and the queen bees that saw Black Lives Matter marches pop up globally within hours after George Floyd’s killing became public knowledge. Here’s to creators like CaShawn Thompson, writer and originator of #BlackGirlMagic, which showcases the accomplishments and capabilities of Black girls and women on their own terms.

In other words: Here’s to the marketers—professionalized and non-professionalized, accidental and intentional, historic and emerging—who uplift Black voices. As a collective, we can liberate our industry from its racist history. To do so will require humility, care and the willingness to make mistakes. In other words, it requires us all not to be pioneers, but something less trailblazing and more essential: It requires us to be caretakers, collaborators and allies. Let us all be accomplices in ruthlessly examining where our industry has failed, and in elevating us to what comes next. “Stories make reality: We know ourselves and the world around us by the stories we tell.”

Autumn is an associate creative director at Manifest. Her favorite campaigns to work on are those that combine deep research with elevating the humanity of the user.